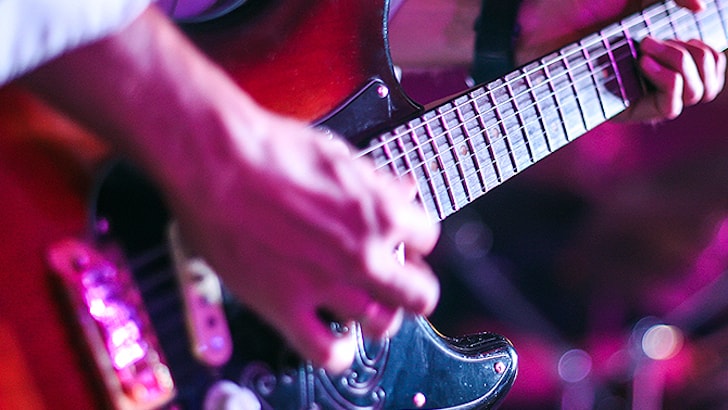 Are you ready to rock? Do you wanna be a rock star, and be jamming with your friends around the world? Well that’s cool, but first you really need to know how to play electric guitar.

What is an Electric Guitar?

The electric guitar could look like a traditional wood guitar, but it is usually a little bit different. An electric guitar is plugged into an amplifier to produce the sounds. So once you are using an electronic gadget to create the amplified the sound of your strings, the possibilities are infinite.

First of all, to learn how to play electric guitar, you need to understand one, and how it works.

So grab a coffee and read on.

Electric guitars have two or three humbuckers (like little microphones) that are used to amplify the guitar string vibration, when strummed or plucked.

Electric guitar strings are made of metal, non-nickel like the classics ones. With metal strings, your sound can be really loud but with a cleaner tone. Any guitar rhythm you want to play will be clearly audible. (Remember that applies even to the mistakes too – when you are performing!) Also, you do need to be more careful with electric guitar strings because they can be broken more easily than a classic guitar string.

When you are equalizing your amplifier to play your guitar, you can use a lot of effects like bass (to make the bass sounds deeper), treble (to get a noisily distorted sound) or medium to get an equilibrium between both of them. Different amps have different effects, but all the basic ones will behave as described above.

Another good function in a typical amplifier is the overdrive button. This awesome functionality is used to distort every sound in the guitar and can be equalized by the gain level in the amplifier. You must switch your overdrive button on, and your gain on ten, if you want to play some thrash metal songs. (Hope the neighbors don’t get upset!)

Now, How to Play Electric Guitar

So, we have talked about the amplifiers, but what about the guitar?

In telling you how to play electric guitar we have to say that it is a little bit different from the way that the acoustic models are played. This is because, thanks to the amplified sound, you can perform a lot of guitar tricks.
A good example of a guitar trick is the well known “bending”. On this trick, you can pull the string or strings up with the finger that is playing the note at the same time you use your pick to perform the sound. Doing this, you will get a higher different note that the one you were playing. You can use this to give strength or emphasis to the solos of your songs.

Another different thing on an electric guitar is the length of the arm. An Electric guitar is made up to play higher notes than a classical one, because it is built with more space between the last notes in the arm of the guitar and the body.

With all this versatility of set up and sounds whetting your appetite, I bet that now you are looking for an electric guitar to start to rock.

However, just be aware that nothing is instant when it comes to playing an instrument!

Just like any instrument, whether classic or electric, this kind of guitar needs hours and hours of practice. So, if you have ambitions to be rock star, get some, well ……..get lots of practice, it’s time to prove you can do it.

Don’t miss out on new posts

© 2023 by Learn Ur Guitar. Some Rights reserved. All lyrics are copyrighted to their respective owners. All contents are restricted for educational, personal or fair use only You are allowed to republish contents with a valid backlink to the original source

Back to Top
Close

Hey Friend!
Before You Go…

Receive a hand-picked selection of our best music articles